This study was conducted to determine the role of L-Carnitine (LC) and Nano L-Carnitine protected male rats from testicular toxicity caused by lead acetate (PbAc) by investigating the effectiveness of biosynthesized L-Carnitine nanoparticles (LC-NPs) on the fertility status of male rats. LC-NPs were synthesized, which could be by encapsulating l-carnitine in Chitosan (CS)-tripolyphosphate (TPP)-based nanoparticles (NP);

On the other hand, The results showed a significant increase (P<0.05) in the percentage of count and motility in group three(lead acetate+l-carnitine) and group four (lead acetate + nano l-carnitine) compared with group two (lead acetate). Show better improvements in the percentage in group four. Also showed a significant (P<0.05) decrease in the rate of dead sperm and abnormal morphology in group three and group four compared with group two (lead acetate).  Histopathological changes were marked in testes; these changes included damage. Severe degeneration and sloughing of germinal epithelium with basement membrane disarrangement; no spermatid in seminiferous tubule lumens accompanied with atrophy and irregularity, vacuolization with few spermatogonia in seminiferous tubule lumens those changes reduced or disappeared in the treated groups. 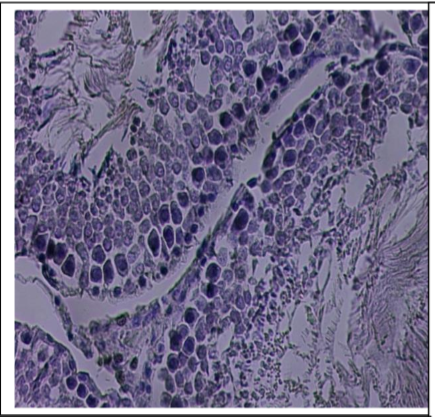