The current study is a unique case of captive capture myopathy in an eight-year-old Persian onager. Depression, tremor, muscular stiffness, Tachycardia, mucosal hyperemia, and red-brown urine were all symptoms of the onager when died 5 hours after being captured. The biochemical parameters revealed increases in the levels of creatine kinase, lactate dehydrogenase, potassium, and cortisol. Necropsy revealed prominent contraction band necrosis that involved heart Purkinje fibers. In the kidneys, tubular epithelial cells exhibited hypereosinophilic cytoplasm and loss of nuclei, and frequently contained fine, yellow-brown granular intracytoplasmic pigment. In the liver, edema and peripheral fibrosis, and moderate congestion expanded sinusoids. The lung parenchyma showed focal alveolar emphysema with atelectasis. In the spleen, lymphoid atrophy along with lymphoid necrosis, in the small intestine, atrophy of intestinal villi, the obvious loss of superficial epithelium, the number of the mucosal glands were decreased and there was a small number of chronic inflammatory cells. In conclusion, this report presents Persian onager capture myopathy, emphasizing the need of knowing the causes of death in wild animals to successfully conserve them in captivity. 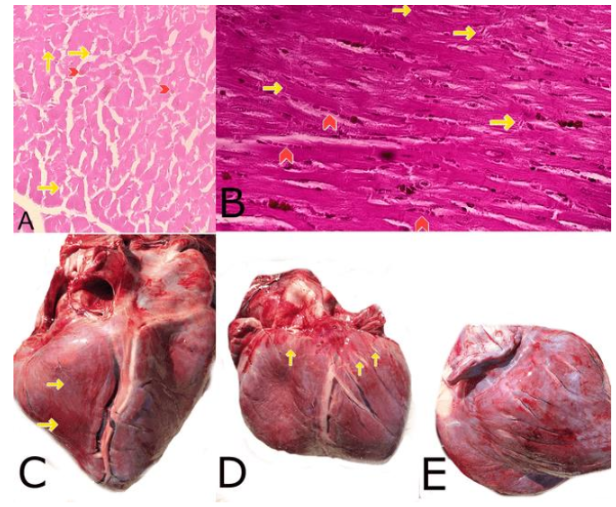