Due to its low toxicity and high bioavailability, nanotechnology has recently proposed a number of new effective forms of nutritional supplement ingredients. Nano-selenium is one of these due to its distinct characteristics of small particles and increased surface area of compounds, allowing for the possibility of biological interactions. 48 laying hens of a Ross breed, who were 47 weeks old, were employed in this investigation the trial ran for two months. Two different meals were provided to the birds: one was a conventional diet, and the other was a non-standard diet that included crushed yellow maize to facilitate molting. Six groups of birds were formed, each with regard to eight birds: A first group received a regular diet, while the second group was only received crushed yellow tops, the third group was given organic-Se (2 g/L) along with a standard diet, the fourth group was given nano-Se (0.5 ml/L) along with a standard stalk, the fifth group was given organic-Se with molting (2 g/L), and the sixth group was given nano-Se with molting (0.5ml/L). The results showed a rise in feed consumption, average egg weight, and production of eggs with an improvement in the feed conversion factor for egg production for the selenium groups, they also showed an elevate in the red and white blood cells, hemoglobin level, with packet cell volume, additionally, treatment with selenium increased glutathione while lowering malondialdehyde levels compared to the control and molting. We draw the conclusion from this study that organic and nano-selenium have beneficial effects in reducing the drawbacks of straw and bringing back the majority of the values to their normal state, which is close to control. 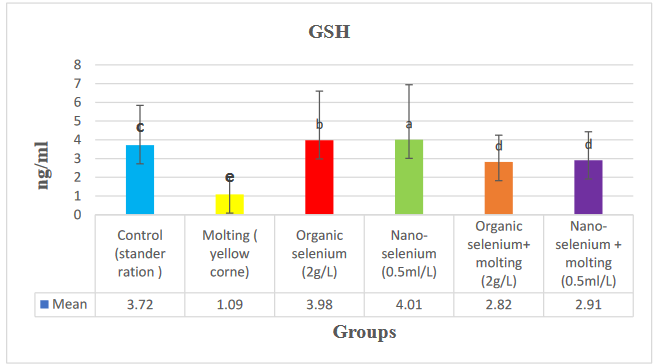