The consumption of non-nutritive sweeteners (NNS) has markedly enlarged in recent years universally, due to multiple factors including the increased prevalence of obesity and hyperglycemia. Studies have inconclusive results about NNS use, some evidence states that it contributes to weight gain and an increase in appetite, however, others say that it plays a significant role in reducing weight and controlling diabetes. In this study we aim to examine the effects of multiple non-nutritive sweeteners on body weight, fasting blood sugar, and total cholesterol (TC), triglycerides (TG), high-density lipoprotein (HDL), and low-density lipoprotein (LDL) using an in vivo rat model. In the results, it was found that stevia reduced the weight of the rat by 50 grams after eight weeks and in the rest of the groups, the weight remained almost the same except for sucrose followed by acesulfame-k which represented a marked increase in weight. There was an overall increase in total cholesterol and LDL and a reduction in HDL in all groups. Stevia, aspartame, and saccharin were found to be most beneficial with respect to reducing weight and controlling the level of fasting blood sugar. Additionally, the results from multiple studies have contradicting conclusions which highlight the uncertainty in the effects of NSS. 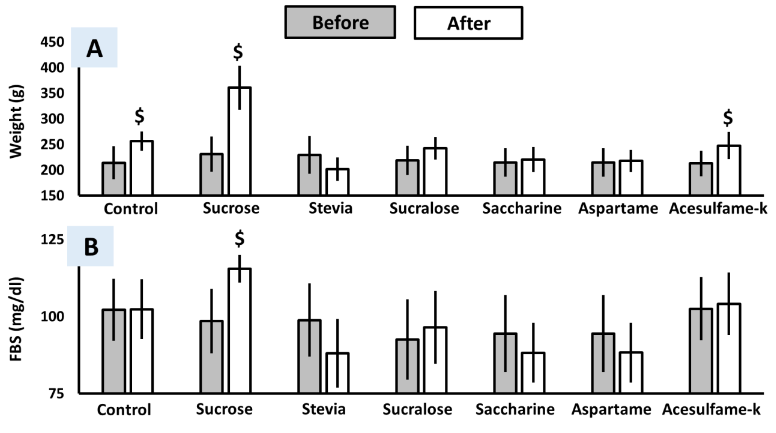