Aim: The focus of this research was to see how the hormone ghrelin affected reproductive hormones and gene expression of LH and Fsh hormone in mature male rats.

Methods: Seventy male rats were used in the investigation, with twenty serving as controls and 50 being given a subcateaneous injection (s.c) of freshly manufactured thyroxine from (Sigma Aldrich Co.-USA) at a dose of 500 µg/kg dissolved in saline to induce hyperthyroidism. For thirty days, After inducing hyperthyroidism, The hyperthyroidic rats were divided into four groups at random. each with ten rats: a positive control group, a hyperthyroic group administrated with GRE at dose (0.5nmol/100μl saline), and a hyperthyroidic group administrated with administrated at dose (1nmol/100μl saline). The hyperthyroic group received GRE at a dose of 2nmol/100l saline. For thirty days,both the positive and negative control groups were given saline. (10µg/rat)

Conclusion: We discovered that GRE decreases the expression of the LH- and FSH hormones directly, which could be attributable to direct effects on the hypothalamusH-P-G. axis. ghrelin can regulator of the testicular functions and represents an important additional link between the male reproductive hormones homeostasis and the reproductive function. 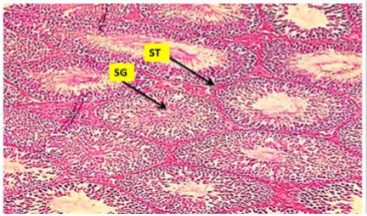