Clinical and Serological Diagnosis of Bovine Hypodermosis in Wasit Province

The present study was conducted on cattle of some areas related to Wasit province during the period of May 2015 to July 2016, and included 536 animals of different ages, both sexes and of local and cross breeds, which examined clinically by manual skin palpation, and then submitted for collection of venous blood samples for serological testing by indirect-ELISA. The overall prevalence was 21.83% clinically and 36.19% serologically. Among of 117 (21.83%) cattle were positive by clinical examination, the seropositives by indirect-ELISA were 115 (21.46%) ones. Regarding to season factor, a higher increasing of warble infestations was reported at April month (58.49%), whereas the highest seroprevalence were detected at December month (69.05%). Relating to age factor, the high incidence rates of hypodermosis were noticed clinically in younger cattle (1-3 years), (33.22%); while serologically, it’s more prevalent in older cattle (>6 years), (73.81%). On sex factor base, the significant increasing (P>0.05) of warbles infestation was reported in females (24.04% and 39.23%) more than males (11.58% and 22.11%) by both clinical and serological tests, respectively. In breed factor, the clinical examination was revealed on a high morbidity rate of infestation in local-breed (33.48%) in comparison to cross-breed (13.27%); while serologically, the high levels of specific anti- hypodermosis antibodies were reported in both, local (35.68%) and cross (36.57%), breeds without significant differences (P£0.05). 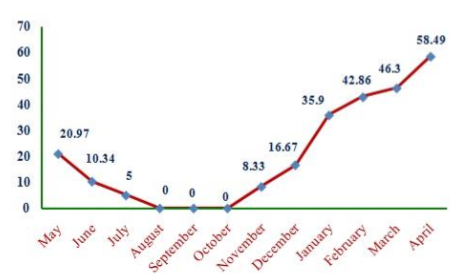