Dairy domestic animals are the primary source of Q-fever disease that caused by Coxiella burnetii to both animals as well as humans. Although, Q-fever having usually mild symptoms or occur asymptomatically, subclinical complications are the main risks in humans and great economic losses among small ruminants have confirmed. This study was performed to investigating of prevalence of C. burnetii in goats of Wasit province (Iraq) during March to April / 2022. Off totally 186 milk samples collected from lactating goats, 26.34% animals were seropositives. Titers of seropositives showed a significant increase (P<0.029) in moderate (63.27%) infection when compared to weak (28.57%) and severe (8.16%). Among positive and negative goats, the findings of clinical examination revealed no significant differences (P>0.05) in body temperature, pulse and respiratory rates. Regarding case history data, significant increases were identified in positive goats with abortion (38.78%), low milk production (57.14%) and in study animals housed and/or pasteurized with sheep and cattle (63.27%). Concerning the demographic risk factors, findings of age were reported an increasing in positivity of C. burnetii in goats aged ≥ 4 years (40.43%) when compared to ≥2 - <4 years (22.5%) and <2 years (3.85%). In insignificant variation (P≤0.053) in positivity was seen throughout study areas; Al-Numaniyah (19.35%), Al-Hai (26.44%), and Al-Kut (27.94%). In conclusion, C. burnetii is relatively high in distribution among study goats and, humans consumed milk and/or their non-pasteurized derivatives of might increasingly be exposed to great risks of infection. 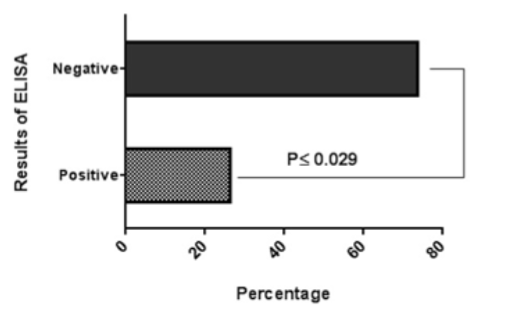