This study was carried out to elucidate the antidiabetic effects of hot aqueous Gryllus bimaculatus extract and some its complications in a streptozotocin (STZ)-induced diabetic type 2 mice. The insects were collected, sterilized with 70% alcohol, dried, ground, and sterilized with the autoclave at a temperature 121°C for 30 minutes. Some chemical tests were done for the hot aqueous of this powder to determine the active compounds of this extract. Diabetes type 2 was induced in the 40 mice by injected them with STZ 50µg/kg body weight (ip) only one induce diabetes while 20 mice were left without injection. The STZ-induced diabetic mice were divided into 4 groups (n=10). The first group consumed highly concentrated of insect extract, while the second consumed low concentration of insect extract. However, the third group consumed Metformin (Glucophage), and the fourth left without treatment. these treatments were administered orally and daily. One group of healthy was consumed highly concentrated of insect extract while the other was left without. During the experiment, FBG and body weight of mice were measured weekly. At the end of experiments, mice were sacrifices after 28 days and blood samples were collected to use in determine FBG, insulin, Urea, creatinin, GPT, ALP, TC, TG, and HDL levels. Then, the pancreases were collected in the 10% formalin to use in the histologic procedure. Administration of the insect extract significantly rescued representative diabetes marker and liver and kidney function markers in STZ-induced diabetic mice. Collectively, our results suggest that Gryllus bimaculatus contributes to the maintenance of liver, kidney and pancreatic β-cell function against a diabetic state through the regulations against apoptosis and anabolic metabolism as well as against the Insulin resistant. 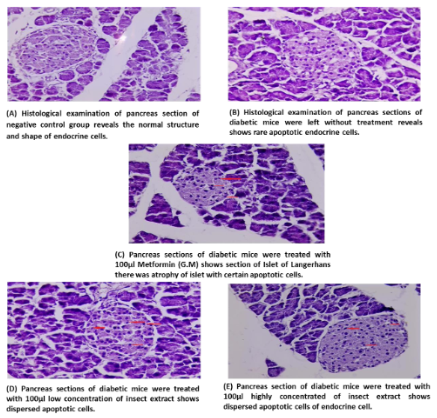